This study examines the characteristics, use and effects of mortars. It is part of a series of technical studies on explosive weapons undertaken by the GICHD, providing evidence and contributing to the analysis of the final report on Characterisation of Explosive Weapons (GICHD, 2017). 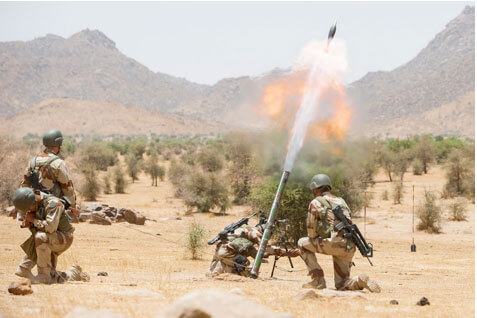 Conventional mortars do not have recoil mechanisms, with the main recoil force being transmitted directly to the ground via the baseplate. The baseplate of a mortar stabilises the system, and helps prevent the barrel from being driven into the ground by the recoil of firing. The bipod serves to help stabilise the mortar, and acts as a simple sighting arrangement. There is generally a thread that allows the barrel to be moved either left or right to adjust for azimuth, and a screw adjuster that allows the angle of firing to be moved up or down, so as to adjust for range. The barrel of the mortar is a metal tube, with a fixed firing pin.

In addition to these three components, modern mortars may also employ a fire-control system (FCS) to help to improve accuracy, set-up times, and speed up the rate of fire. Mortars are relatively simple weapon systems that can be locally manufactured using fairly basic metalworking skills (Jenzen-Jones, 2015). 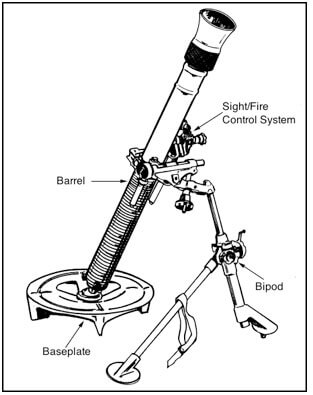 Figure 1. The M252 81 mm mortar, currently in use by Canada, UK and USA (source: GlobalSecurity.org).

Most mortars are restricted in elevation, and are only capable of firing at high-angle trajectories (above 45°), meaning that they cannot be used in the direct fire support role (Jenzen-Jones, 2015). Mortar projectiles often impact the target at a very steep angle, making mortars ideal weapons for firing over, into or out of defilade. Sometimes referred to as ‘the poor man’s artillery’, they are simple to manufacture and operate, rugged, portable, cheap, and versatile, although generally less accurate than artillery (Dullum et al., 2016).

Mortars have a number of different designs in various calibres; this report highlights some of the most commonly encountered varieties of conventionally designed medium and heavy mortars – specifically 81 mm and 82 mm medium mortars, and 120 mm heavy mortars. Mortars are generally one of the most responsive of artillery weapons, capable of engaging targets quickly and at shorter ranges than many artillery guns or rocket systems. Generally speaking, medium mortars can fire at ranges of 100 m to 5500 m, while heavy mortars have a range of some 500 m to 7,000 m (Gander & Hogg, 1993; Isby, 1988).

Mortars are found in the inventories of almost all state armed forces, and a majority of larger non-state armed groups. They are comparatively easy to operate and are employed with frequency in current and recent conflict zones. A single 120 mm mortar projectile was fired into a market in the attack on 5 February 1994 in Sarajevo, killing 68 and injuring approximately 144 civilians (Fish, 2004). These casualty figures are unusually high considering single mortar effects. However, in populated areas people gather in large numbers in relatively small and often semi-enclosed areas such as markets. This brings them within the effective range of the projectile, explaining the terrible outcome in this example.

Whilst 100, 160, and 240 mm mortars are also employed in conflict zones, 120 mm calibre mortars are by far the most common heavy mortars in service globally. Both smoothbore and rifled 120 mm mortars are in common usage. Much like rifled firearms, rifled mortar barrels impart spin to projectiles as they move up the barrel, which can increase accuracy. The most notable rifled 120 mm mortar is the French-designed MO-120 RT-61, which is currently in service with at least 24 different armed forces in the world, including the US Marine Corps (General Dynamics, 2007). 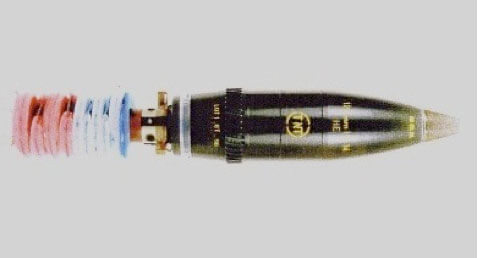 Figure 2. An example of HE ammunition for the 120 mm MO-120 RT-61 rifled mortar. Note pre-cut driving band to the rear of the body (image credit: Mil-Spec Industries Corporation)

The range of any given mortar’s projectiles can be adjusted using two methods. Firstly, altering the angle of the mortar barrel will affect how far the projectile will be able to travel. A higher angle will result in a shorter range, and a lower angle will have the opposite effect. Additionally, many mortar projectiles may be fired with an adjustable propellant load. An increased amount of propellant will result in an increased range. Mortars may be initiated by a fixed or, more commonly, removable ignition cartridge (sometimes referred to as a propelling cartridge), which features a pyrotechnic primer. In addition to this, incremental propellant charges, sometimes known as augmenting, auxiliary, or supplemental charges, can generally be fitted to a mortar projectile.

Photo 2. Photo of the FRY 81 mm M72 HE mortar projectile, showing six augmenting charges on the tail (source: Mine action centre of the Republic of Serbia, Banja Luka).

The typical mortar projectile is widest at the tail, and just behind the shoulder of the body. It is at the shoulder where the shape of the projectile is designed to prevent the gases produced by the propelling charge from escaping past the body of the projectile, and reducing its range. The most common way of stopping the escape of the gases is to use a series of gas check bands. Some mortar projectiles use a hard nylon obturating ring or obturator band, instead of gas check bands.

Figure 3. Arrangement of a typical mortar projectile (source: US Department of the Army, 2007).

The maximum range of a mortar projectile is directly affected by the model of mortar it is fired from, as well as the number of incremental propellant charges. It is often the case in conflicts involving irregular forces that the ammunition being fired is not specifically designed for the model of mortar in question (ARES, 2016). The length of the mortar barrel has the most significant effect on the range of the projectiles fired, with longer barrels tending to allow for longer ranges. While the munition should nominally match the calibre of the mortar, there may be limitations on the amount of propellant that a given mortar can accept without damage. Generally speaking, newer projectiles fired from more modern mortars have greater ranges than the older versions.

23 cases were studied where mortars were involved. 6 case studies were selected for this report on the basis of the confirmed use of these weapons, the accuracy of documentation, and to geographical distribution of conflicts across the weapon studies. These cover the period from February 1994 to August 2015, and the following countries and territories: Former Republic of Yugoslavia, Libya, Syria, Afghanistan and Yemen.

At 12:15, a single 120 mm high explosive mortar projectile detonated in the crowded Markale marketplace in Sarajevo. 68 people were killed and approximately 144 people were injured. It is probable that the high buildings around the marketplace reflected the shockwaves into the crowd, thereby increasing the lethality of the munition.

At approximately 11:00, 5 high explosive mortar projectiles of indeterminate calibre or calibres detonated in the same Markale marketplace as the 1994 attack. 42 people were killed and an additional 85 people were injured in this incident.

At approximately 17:30, a single 81 mm high explosive mortar projectile struck the Zawiyat el-Mahjoub medical clinic. Although nobody was killed in the incident, 4 people were injured and an ambulance and 3 private vehicles were damaged.

At approximately 13:45, an unknown number of high explosive mortar projectiles struck the refectory of the College of Architecture at Damascus University. The incident killed 15 people and injured 20 more. The majority of those killed and injured were students. Major damage was caused to the refectory.

An unknown number of mortar projectiles hit a wedding party that was being held on New Year’s Eve 2014. These killed 20 people and injured another 40.

Some time between 21:00-22:00, a high explosive mortar projectile hit a house in the Al-Shamasi Neighbourhood. One person died from fragmentation wounds. The house and a car were damaged in the incident. This is one in a series of mortar attacks on residential areas in Ta’iz.

Map of the area:
See Figure 5. 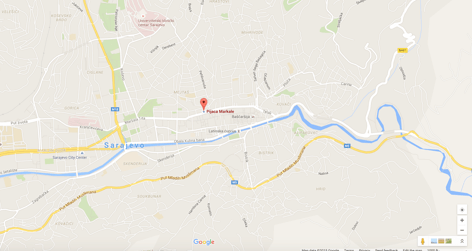 Number of mortar projectiles fired:
One.

Range mortar fired from:
Approximately 6.2 km from the village of Mrkovici, although the exact origin could not be determined.

Remarks:
BBC reports that unusual about the attacks was that the market would have been considered a safe place from mortars as it was surrounded by high buildings.

Map of the area:
See Figure 6 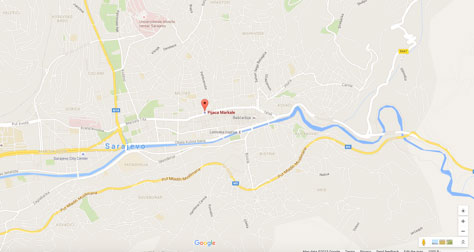 Range mortar fired from:
Lukavica area at a range of between 3,000 and 5,000 m (UN Protection Force Investigations). The first UNPROFOR investigation concluded that the direction of fire was 170 degrees, which means that the mortars were located in the vicinity of Mount Trebevic.

Casualties:
There were 127 civilian casualties; 43 of these died and 84 were injured. Twenty-three died immediately and 104 were injured, of whom 76 were transported to the Koševo University Hospital. Eight of these patients died in the hospital reception area immediately upon arrival. Twenty-eight casualties were taken to the State hospital; two of them died following reception. Another five died at the Koševo Hospital after surgery, and four died of complications a week later. Eighty-four casualties survived. 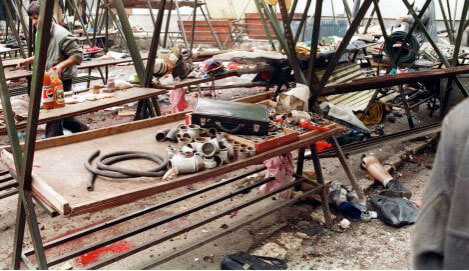 Photo 4. A picture of the Markale market, Sarajevo, immediately after the attack (image credit: Blic).

Remarks: Detailed reports of injuries were possible due to the fact that the attack was a major one, and was documented well enough by doctors writing in medical journals for them to improve their own response to emergency situations.

Map of the area:
See Figure 7. 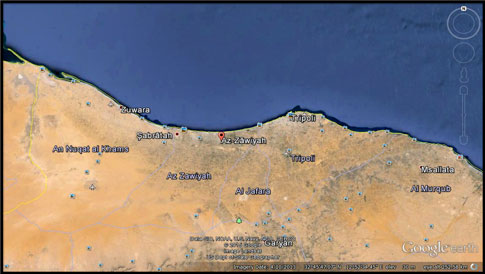 Number of mortar shells fired:
One 81 mm high explosive mortar round (as determined by Human Rights Watch, based on remnants and impact marks).

Range mortar fired from:
Unable to identify. Nearest fighting happening at the time of the attack was one kilometre away.

Damage:
Fragments from the mortar hit the clinic. Damaged one ambulance and three cars. 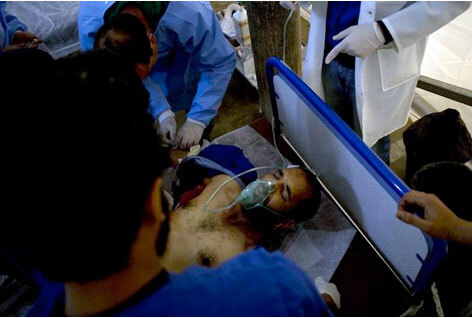 Remarks: This attack in a populated area also damaged a medical clinic. HRW was unable to identify which direction the mortar projectile came from.

Map of the area:
See Figure 8. 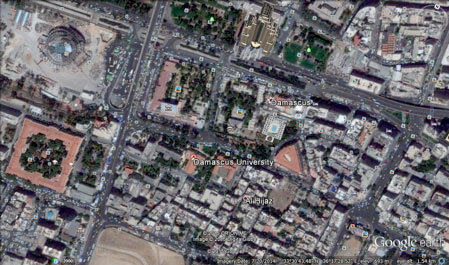 Figure 8. A map of the area around the College of Architecture, Damascus University, Syria (source: Google Maps).

Number of mortar projectiles fired:
More than one, but reports were not more specific than that.

Casualties:
Estimated death toll of 15 people, with 20 injured. Video reports show two wounded; one with fragment wounds in the back, and one woman with a bandaged head.

Infrastructure damage:
Minor damage to buildings around the street, but major damage to canteen area.

Photos of the damage: 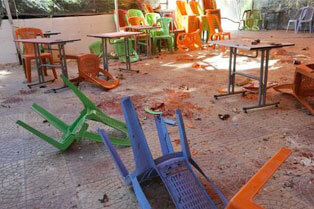 Photo 6. A photo of the College of Architecture canteen area in the aftermath of the attack, Damascus University, Syria (image credit: Reuters).

Remarks: The attack was made on the university, which is located in a district that also contains government buildings. The ministry of defence, the headquarters of the state media and President Bashar Al-Assad’s residence are all in the vicinity. At the time of this attack, mortars were a new element in the conflict, and it has been difficult to establish which party was firing them.

Map of the area:

Range mortar fired from:
Fired from three directions at the town of Sangin, but the exact firing points were not established.

Casualties:
Death toll of 26 people, and approximately 41 injured, including women and children. The survivors had injuries to limbs and burns. Most of the dead and injured came from a wedding party that was being held in the village.

Map of the area:
See Figure 10 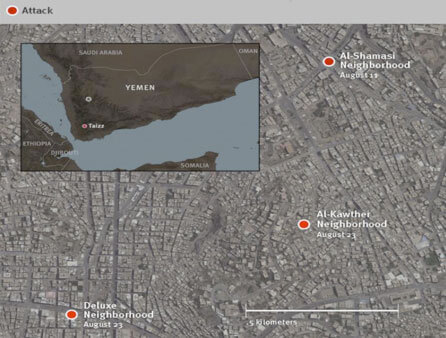 Number of mortar projectiles fired:
One.

Remarks:
This is one of a series of attacks in Yemen in which mortar rounds were used against the civilian population with no military targets in the vicinity. 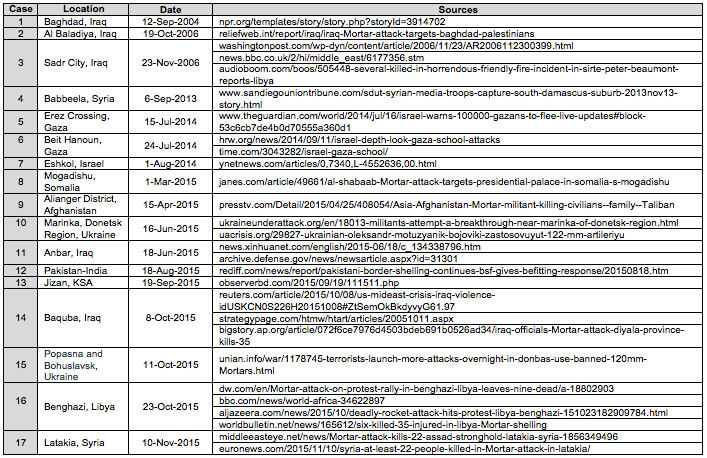